54-year-old woman swallowed 22-foot python, stomach had to be ripped to recover the body 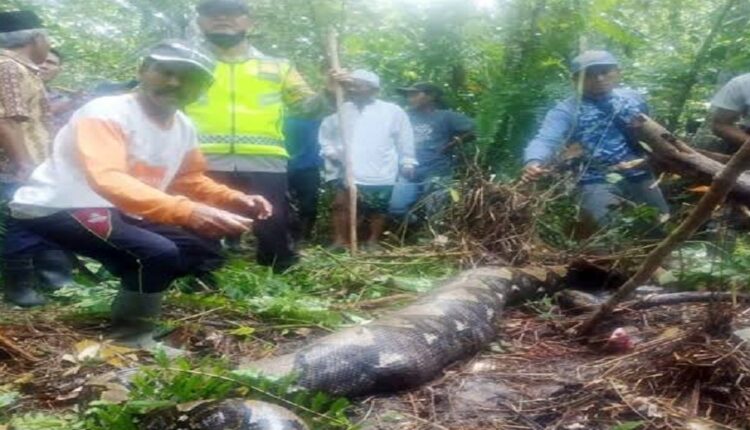 A shocking case has come to light from Indonesia, about which everyone is shocked to know because seeing a 22-foot python here swallowed a 54-year-old woman completely and to recover the body of the woman, the body of the python had to tear

The dragon swallowed the woman

Hearing the name of snakes, a person trembles from head to toe. You can guess this from the fact that if small snake Even if the village is seen in the town, then there is an uproar in the whole area. But what if a woman swallows a python whole.. Yes, you read it right. Whole world has surprised the people.

According to media reports, this heart-wrenching case has come to the fore from Indonesia. Where a 22-foot-long python swallowed an elderly woman whole. According to village head Faris, 54-year-old Wa Tiba had gone to a vegetable garden near her village on Muna Island in Southeast Sulawesi province on Thursday evening. After this she did not return to her home and the news of the woman’s disappearance spread like a fire in the whole village.

On Friday, when her family went to the forest to look for her, they found several items belonging to the woman. At the same time, a dragon appeared at some distance. Whose body appeared bloated in the middle. Seeing the body of the dragon, he doubted whether the python had taken his wife out.


After this, the villagers together with the family caught the python from both sides and started beating it by dragging it. Together they ripped open the back of the dragon and took out the dead body of the grandmother. Everyone is shocked after seeing this sight. Faris said the victim’s garden, about half a mile from her home, is located in a rocky area with many snakes in caves and rocks.

Bumper profit! After dearness allowance, now the number of fitment factor, salary may increase by Rs 49,420

Husband was celebrating Rangraliya with another woman by paying money, wife caught…

Question asked to the girl, what is hanging round in front of you, everyone was…