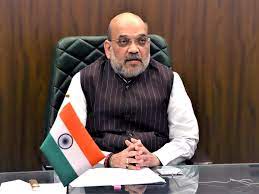 Assembly elections are likely to be held in Gujarat by the end of the year. In such a situation, Union Home Minister Amit Shah on Monday interacted with the BJP leaders of the districts of North Gujarat and reviewed the preparations for the elections. The party leaders said that Shah attended the meeting at the Medical College in Palanpur city of Banaskantha district.

Meanwhile, Chief Minister Bhupendra Patel and state BJP president CR Patil were present along with other leaders. He said that the BJP leaders of North Gujarat region including MLAs, MPs, Panchayat Presidents, local office bearers and representatives of cooperative societies were present in this meeting.

This was the third regional level conference under Shah’s leadership. Earlier in the last two days, he had participated in similar meetings in Valsad and Vadodara areas of South and Central Gujarat respectively. Tomorrow i.e. Tuesday will attend the convention organized at Veraval in Somnath district.

Party workers said the seats are aimed at achieving its ambitious target of winning 150 seats for the BJP in the 182-seat assembly. The purpose of these meetings is to provide guidance and strategies to achieve this goal, he added.

IND vs PAK: Khalistani was told in the Asia Cup, now after dismissing Babar and Rizwan in the World Cup, Arshdeep Singh said a b

Guinness World Records considered Monday the worst day of the week! You will be surprised to know the reason

A mountain of sorrow broke on Rakhi Sawant, the mother of the actress passed away.…