In the winter session of the Haryana Vidhansabha starting on Monday, the Congress will expose the BJP-JJP government on issues r 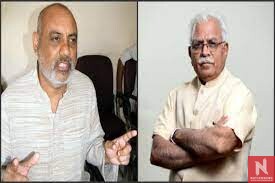 Vedprakash Vidrohi, president of the voluntary organization Rural India and spokesperson of the Haryana Pradesh Congress, said in a statement that The Congress will expose the BJP-JJP government on issues related to the common people in the winter session of Haryana Vidhansabha starting on Monday. the rebels Said that Congress is the only opposition in the 90-member assembly and all other MLAs are directly or indirectly Sanghi puppets of the BJP government whose strings are with the BJP-Sangh. To say that INLD’s only MLA Abhay Singh Chautala prides himself for being in the opposition, but behind the scenes he works like a Sanghi puppet. Abhay Singh Chautala has already been exposed by directly supporting the BJP in the Rajya Sabha elections and the entire state has come to know that he is an indirect ally of the BJP whose body is visible in the opposition but his soul is mortgaged to the federalists. Vidrohi said that in the same way, except the independent MLA of Meham, other independent MLAs have already become allies of BJP. At the same time, Maham MLAs also make tall-broad stunts, but they also do every work which benefits the BJP and harms the Congress. The ground reality today in the 90-member assembly is that only 30 Congress MLAs are actually the opposition. In the winter session starting from Monday, all the 30 MLAs unitedly exposed the BJP-JJP government by raising every issue related to common Haryanvi, farmers, laborers, employees, businessmen, students, youth, women and common people. will do.

Haryana Pradesh Congress Committee spokesperson Ved Prakash Vidrohi paid heartfelt tributes to the country’s senior most leader former Prime Minister Atal Bihari Vajpayee on his birth anniversary. Kapil Yadav, Pradeep Kumar, Aman Yadav Advocate, Ajay Kumar and Yash Kumar also paid their respects on this occasion. The rebel said that Atal Bihari Vajpayee was the Prime Minister of the country between 1998 and 2004. Earlier, in May 1996, he became the Prime Minister for the first time for 13 days. His political and social journey from Rashtriya Swayamsevak Sangh and Jansangh-Janata Party to BJP was very exciting. Atal ji was an intense orator and also knew the art of impressing his opponents with his speech. Vidrohi said that he was a high class politician and person who used to respect even his opponent openly. Despite being a bitter critic of Nehruji, he was always ready to take inspiration and blessings from Nehruji. On the success of the Indian Army in the Indo-Pak war of 1971, he publicly described Mrs. Indira Gandhi as an incarnation of Durga. At the same time, he was so convinced of Rajiv Gandhi’s human qualities that he always praised Rajiv Gandhi in his personal discussions. Vidrohi saluted Atal Bihari Vajpayee ji on his birth anniversary.

IND vs BAN: KL Rahul again spewed venom against Kuldeep Yadav, told why he was dropped from the second test

‘NDA will face a big blow in Maharashtra, the survey shows it right’, said NCP Chief…

Who is better in handling the economy, Modi or Manmohan? Know whom the public chose…

This is the smallest railway station of the country