Will there be a shadow of #Sun #Eclipse on Diwali? Rare eclipse of eclipse formed after decades, know everything – Nation 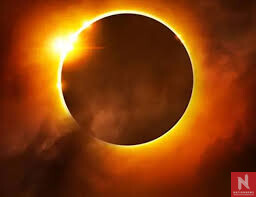 Surya Grahan Solar Eclipse Date Diwali 2022 And Sutak Kaal Time: Diwali is on Monday, 24 October and the next day i.e. on 25 October is the last solar eclipse of the year, then Govardhan Puja. According to the Hindu calendar, the festival of Diwali is celebrated every year on Kartik Amavasya Tithi by worshiping Lakshmi-Ganesh and Govardhan Puja is performed on the next day. But this time there will be a partial solar eclipse soon after Diwali. After many years, the second day of Diwali is not Govardhan Puja but there is a difference of one day. Such a coincidence of solar eclipse between Diwali and Govardhan Puja is happening after many years. According to a calculation, after the last 1300 years, with the solar eclipse falling between two major festivals, Mercury, Jupiter, Venus and Saturn will all be present in their respective zodiac signs. This last partial solar eclipse of the year will be visible in many parts of India. If the solar eclipse is visible in India, its Sutak period will be valid. Due to which religious beliefs related to the eclipse will be followed. Will go Let us know all the information related to the solar eclipse on October 25 and its effect in detail.

At what time will the solar eclipse start in India?

Where will the solar eclipse be visible in India

Solar eclipse will be visible here in the country-

Solar eclipse will happen in this zodiac

When will the Sutak period of solar eclipse start?

Do’s and Don’ts in Eclipse?

what not to do

What are the things pregnant women should keep in mind during solar eclipse?

According to religious beliefs, pregnant women should take special precautions during the eclipse. Pregnant women should neither watch the eclipse nor go out of the house during the eclipse. Pregnant women are advised to take special precautions during the eclipse, there are many religious beliefs and scientific facts behind this. During the eclipse, if the proud women watch the solar eclipse or go out, then there is a negative effect on the newborn baby in the womb. The rays emanating from the sun during an eclipse have a bad effect on the health of the mother and the child. From the point of view of astrology, the effect of bad planets Rahu-Ketu on the Sun and Moon is maximum at the time of eclipse. For this reason, there may be some defect related to these planets in the child’s horoscope.

Why are basil leaves added to food and drink during an eclipse?

All animals, humans and plants get their energy from the sun. The sun is the biggest source of energy. In astrology, the Sun is considered the factor of light and life. In such a situation, during a solar eclipse, the power of the sun gets weakened for some time, which definitely affects everyone. There are some such effects on health during solar eclipse.

When does a solar eclipse occur?

During a solar eclipse, there are corrupt and negative energies present all around. In such a situation, to avoid them and to get benefits, some measures are taken related to the Sun God.

These zodiac signs can have an effect- Taurus, Gemini, Virgo, Libra, Scorpio and Capricorn

How much shadow of solar eclipse on Diwali Mahaparva?

The lioness was trying to hunt the baby buffalo, then what happened… will leave you laughing

Virat Kohli becomes a run machine as soon as he comes in front of Pakistan, now ahead of Virat Kohli in this matter